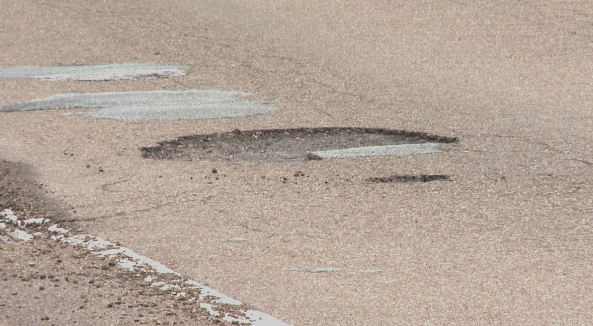 JACKSON, Tenn. — Jackson‘s Street Department could not say for sure how much money road repairs will cost following a week of winter weather with snow, ice and a hard freeze. Road crews patched potholes Monday in Jackson. Driver Abe Harini said potholes are worse this year. “I swerve around them,” he said. “I try to anyway, but there’s so many this time it’s really hard not to. I mean, it’s kind of hard to avoid them.” The street department could not say how much repairs could cost, but they plan to patch the potholes anyway. “We went from fighting the ice and snow to fighting the flooding,” said deputy superintendent Buddy Crick. “Now [we’re going to] fight some potholes.” Crick estimated they repair between 50 and 150 potholes every month. He said this month they could patch 500. Crick said they plan to have multiple crews working on potholes throughout the week. For now, they used a cold mix to make repairs. “It will work, but it’s not a permanent patch,” he said. Crick said once the weather warms up, workers will go back over potholes with a hot mix. “Just slow down until we can get over the city and get them patched,” he said. Drivers such as Harini want to see the roads repaired. “I think they need to take it seriously,” he said. Crick said the street department can pull resources from other departments to help with repairs if necessary. He said they plan to have up to eight or 10 trucks out repairing potholes over the next couple days.