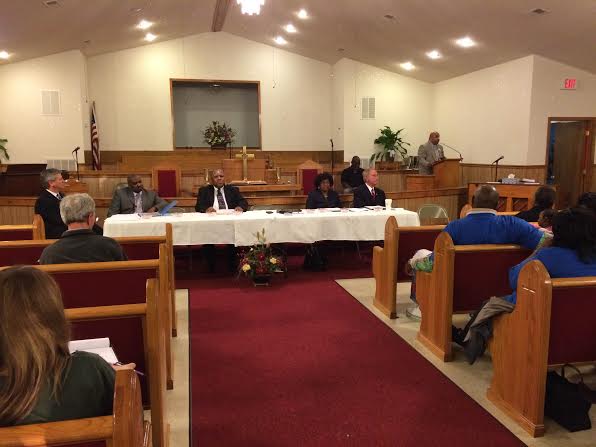 JACKSON, Tenn. — Crime in Jackson was the dominating issue Tuesday night in the first mayoral forum ahead of the May election. The Chester Area Neighborhood Association hosted a town hall-type meeting at New Great Bethel A.M.E. Church on Cartmell Street. All five of the 2015 mayoral candidates attended. Each was given five minutes to introduce himself, then questions were taken from the audience. Much of the discussion revolved around stopping crime in Jackson, starting with the city’s youth. “We’re still working every day to mentor our young people who are at risk,” said Mayor Jerry Gist, who is running for a third term. “We are teaching them skills, communicating and teaching them how to dress.” “Yes, we have to look at ways in which we can instill within our young people, ‘Yes, you do have a future,'” Dr. James Baxter said. “The student in that school ought to know everybody that works for the city, the mayor especially,” Lowe Finney said. “They should be there so much they think they’re on staff.” “In the books and magazines and media of today, we know that offenders come from certain socio-economic backgrounds,” Charlie Lee Motton said. “They’ve taken the mom and dad away, or taken the dad away from the mom, and said only the government can release him,” Tim York said. Election day is May 5. There will be at least three more mayoral forums before then but just one live debate. WBBJ is teaming up with Jackson State Community College to bring you the debate live from Ayer’s Auditorium on the east Jackson campus. You can attend in person or watch from 6 p.m. to 7 p.m. April 23 on WBBJ ABC 7 and CBS 7.