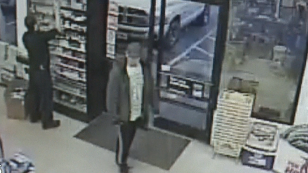 McKENZIE, Tenn — Officers need help finding a suspected flasher accused of exposing himself to the same young woman multiple times inside a local store. “A subject 25 to 30 years of age exposed himself at a local dollar store,” Police Chief Craig Moates told WBBJ Tuesday. A camera at the front of the Dollar General store shows the suspect. When he walked in, there was no need for concern, but by the time he walked past the woman, he was covering his crotch with his jacket. The police report says he exposed himself three times in the store to the same victim. Authorities believe he left in a white van that seems to have markings on the side windows. McKenzie police say crimes like this are unnerving to the public. “It kind of shocks the conscience a little bit when you’re in a shopping area and someone exposes themselves in this manner,” Moates said. Authorities say they haven’t had any other reports similar to what happened in the Dollar General. McKenzie residents WBBJ spoke with say it’s unsettling that it happened. “Now I’m a little insecure to know that something like this would happen in such a small town,” McKenzie resident Stephanie Bolin said. “It would make me feel very uncomfortable for me or any daughter or anybody,” resident Patricia Sanders said. “It’s not your place to show your body parts to just anybody who’s walking around like that, and then for him to do that, he just don’t have no respect for women at all,” resident Jazane Williams told WBBJ. Police hope you can help them identify the man before it could happen again. “Right now, we do not have a clear understanding of who this person is,” Moates said. “We’re trying to locate him so that we can further our investigation with prosecution.” McKenzie police say they’re not sure exactly what the charges will be for the man when he’s caught. If you recognize the man or know of other incidents, call McKenzie police at 731-352-2264.