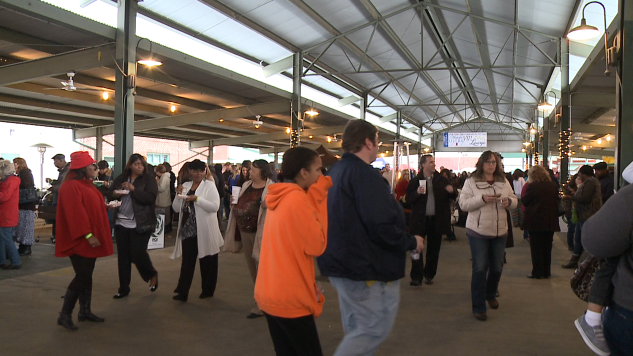 JACKSON, Tenn. — For the 29th year, hundreds of West Tennesseans came out in droves to taste what Jackson has to offer Thursday night, all while supporting a good cause. For the first time, A Taste of Jackson and West Tennessee was held outdoors this year at the Farmers Market in downtown Jackson. And although it was a little rainy and cold, that did not stop anyone from coming out to support the March of Dimes. “The food is great, the atmosphere is fun, there’s lots of music being played,” Lisa Brown said. “It’s a very good cause that we’re out here for.” For the past 29 years, A Taste of Jackson has brought out local food and flavor all to benefit the March of Dimes. “Just to see all of the community, families, mothers, dads, everyone out here is just great,” Tiffany Nance said. Aiming to improve the health of new-born babies, the March of Dimes supports and educates mothers of children born prematurely or with birth defects. “It’s a struggle,” Nance said. “But with the March of Dimes’ help, parents and mothers can be aware of what to do.” Nance’s son was born weighing only 2 pounds, 10 ounces, and she said without the March of Dimes’ help, she would not have known where to turn. “It was totally unexpected,” Nance said. “He was born at 28 weeks, so I had no idea what to expect or how to take care of a premature baby.” Nance’s family is one of thousands benefiting from the money raised during one of the organization’s largest fundraisers. Organizers say they raised more than $35,000 last year for the March of Dimes, and they are looking to surpass that number this year.