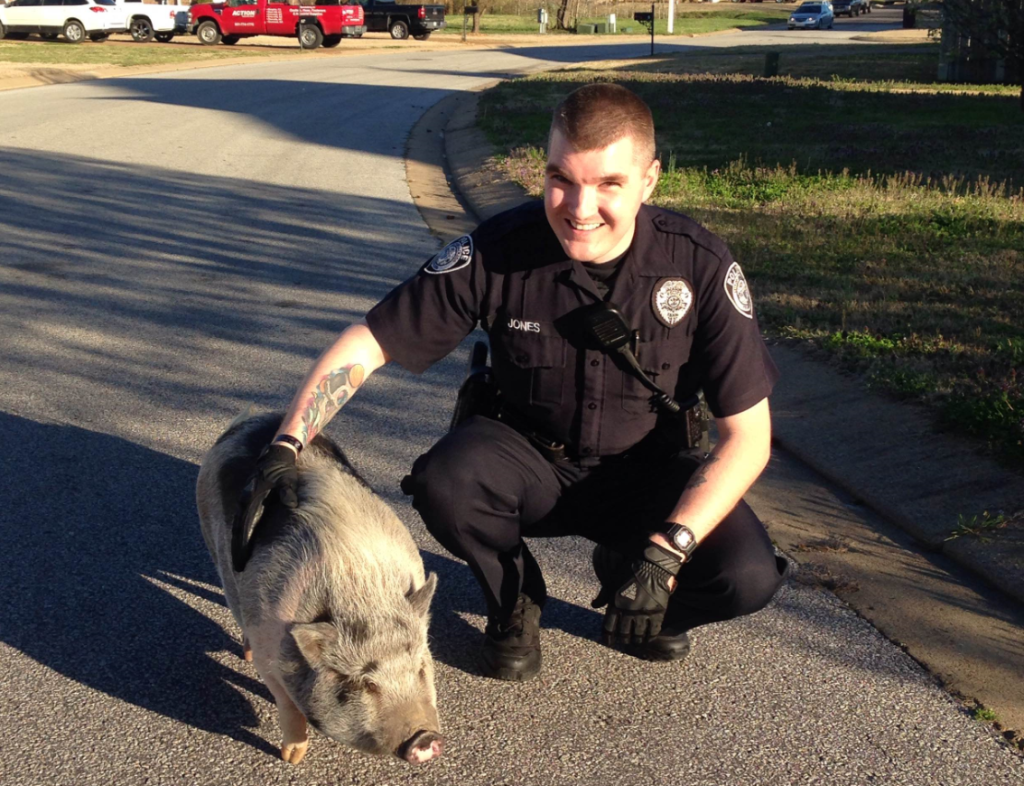 JACKSON, Tenn. — The Jackson Police Department apprehended an unusual suspect Monday afternoon. On the run for more than an hour, officers eventually were able to get her into custody without incident. This definitely wasn’t your normal manhunt — it was actually a pig hunt. A 2-year-old miniature pot-belly pig wandered away from home in north Jackson, making her way into the surrounding neighborhoods, meeting and greeting along the way before police caught up with her. “She’s probably 90 to 100 pounds, and she’s just a big baby,” said Heather Bassett, the pig’s owner. Pearl the pig decided to go out and meet the neighbors Monday afternoon but ended up having police called on her. “I mean it was strange,” neighbor Patricia Beasley said. “I’ve never come out my door before to be greeted by a pig.” Beasley said she noticed Pearl after her dog in the backyard started barking and that she immediately called 911 because she knew something was not right. “When he came in my backyard, my dog was getting ready to eat a bacon sandwich!” Beasley said. But Jackson police officer Lee Jones quickly caught up with Pearl and helped her find her way back home more than a quarter mile away. “I asked, is it illegal to own a pig? And he said well no, we’re just figuring out how to bring her home,” Bassett said. “I said she likes food so that usually gets her here.” Pearl’s owner said she is normally a house pet, but with the nice weather she let her out in the backyard while she was running errands. “She likes to roam around and she doesn’t really have many boundaries,” Bassett said. “She just goes where there are acorns or food or someone to pet and scratch her belly.” It took officers a little more than a half hour to lure Pearl back home. They said the owner is not expected to face any fines.