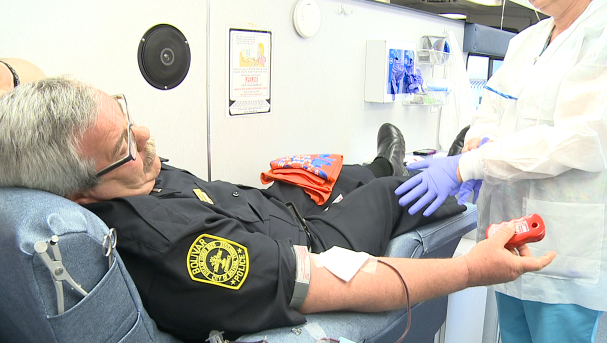 BOLIVAR, Tenn. — It’s a big, bloody battle among Hardeman County and Bolivar city leaders. The Hardeman County Sheriffs Office, Bolivar police and the fire department all took part Wednesday in the Battle of the Badges, a community blood drive with one goal — to give a better chance at life for the people they rescue. It’s gloves off and sleeves up for Hardeman County’s first responders looking to take home this year’s bragging rights and see which agency can get the most people to donate blood. The Battle of the Badges features four Hardeman County first responders, police, deputies, firefighters and paramedics. The object is simple — come out and donate blood in support of your favorite department. “The biggest part about this all is giving blood,” firefighter Chris Bell said. “There’s folks that need blood, and right now they are at a critical low and it’s good we can have fun and save lives at the same time.” Each donor will give just more than a pint of blood. Officials with Lifeline Blood Services say this is a critical time for donations and that after a harsh winter, blood supplies were at a low. Officials say the blood drive is not only to save lives but a chance to build relationships with the public. Results have been tallied, and the Bolivar Fire Department is the winner in this year’s Battle of the Badges.