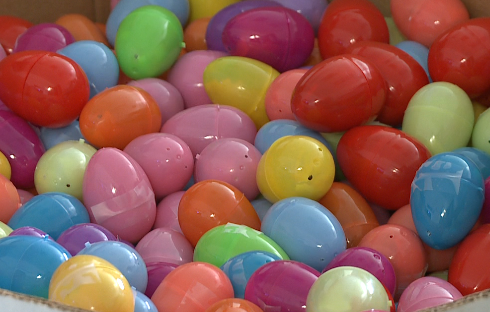 JACKSON, Tenn. — Thousands of kids from across West Tennessee spent the day Saturday collecting colorful, plastic, candy-filled Easter eggs. One local Easter egg hunt has been in the works since Halloween. “The Great Egg Hunt” at West Jackson Baptist Church brought out hundreds of children from toddlers to fifth graders. To make the fun happen, West Jackson Baptist Church members have been planning since the fall to ensure enough candy and eggs for the hundreds of kids. “We put buckets out and boxes out around the church, and they can drop those things in and then generally in January we start making big pushes as far as announcements,” Minister Robin Popplewell said. This was the second annual Great Egg Hunt, which doubled in size from its first year. “The main purpose for us is not the egg hunt. It’s not the popcorn,” Popplewell said. “It’s to make sure that we’re sharing the gospel with those kids, inviting their parents to come to church tomorrow.” It’s a day of fun with a much deeper purpose. “It means more than just Easter,” 10-year-old Brandon Martinez said. “It’s about Jesus and how he took all the sins from us.” Popplewell says this event draws people from surrounding towns and even some from out of state. “It’s just an avenue to be able to share Jesus with them,” Popplewell said. “That’s all we’re trying to use it for, so it’s fun. We have a ton of fun doing it, but that’s not the end goal.” West Jackson Baptist Church is inviting those looking for a church to attend Easter service on Sunday. Services begin at 8:45 in the morning.