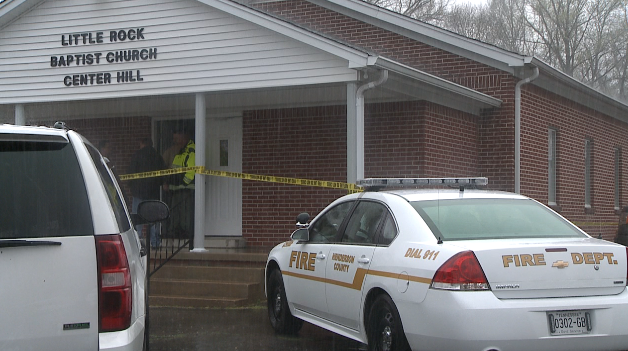 HENDERSON COUNTY, Tenn. — One of the holiest of days is scarred for a local congregation after an Easter weekend fire leaves the inside of their church seriously damaged, and investigators say it was an intentional crime. Easter services were held in the parking lot Sunday after the heartbreaking discovery at Little Rock Baptist Church. “A church member had gone in that morning to open the church up for services and just noticed the damage,” Henderson County Sheriff Brian Duke said. Investigators say three small fires were intentionally set inside at some point over the weekend and extinguished themselves, but not before burning pews, carpeting and shattering a stained glass window. “The church had some damage. A lot of smoke damage,” Duke said. “It looked like someone had tried to start a fire in the church.” State arson investigators and the Bureau of Alcohol Tobacco and Firearms now are left to try to figure out what this arsonist may have left behind. “Fingerprints, footprints, anything that may generate leads as to cause of the origin of this fire,” ATF agent Michael Knight said. Officials say other church fires, including one that happened earlier this year in Haywood County, could give them clues. “We look at certain types of patterns and trends to see if this is a serial arsonist that may be going around the country or around this area setting fires,” Knight said. But with the damage done, it has left many still wondering why. “It most likely occurred on Easter weekend,” Duke said. “So it raises lots of questions and causes a lot of concern.” Investigators are asking anyone who may have any information on this fire to call local law enforcement or the Tennessee Arson Hotline at 1-800-762-3017. A $1,500 cash reward is being offered, and callers can remain anonymous.