Soup kitchen sees increase in patrons, even with unemployment decreasing 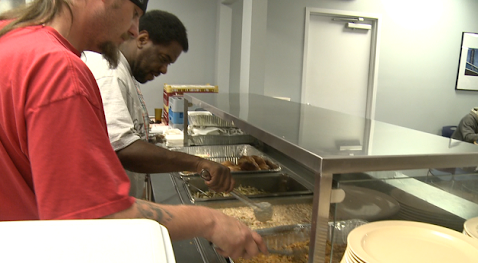 JACKSON, Tenn. — The unemployment rate in Jackson has steadily declined over the past few years, but managers at RIFA’s soup kitchen said Sunday the need they see is increasing. Unemployment in Jackson has dropped an estimated 2 percent in the past two years, which is about 5,000 more people with jobs, according to the Tennessee labor force. Officials with RIFA’s soup kitchen said they’re actually serving more meals now than they were two years ago despite the decrease in the city’s unemployment rate. “Seven years ago, when I started as a kitchen manager, there was about 49,000 meals,” said Dan Ward, the volunteer coordinator at RIFA. “There’s an increase each and every year.” Ward said there’s a 7-10 percent increase every year at the soup kitchen. This year, they’re expecting 5,000 more meals to be served than last year. Margaret Boykins said she’s been coming to the soup kitchen for years and that it’s not just the need for food that brings people here. “It helps out the people that don’t have anything, or those that do, to mingle with people,” Boykins said. Ward said most of the patrons he sees are part of a group he calls the “working poor.” “They may have a minimum wage job,but it’s still just not enough to make ends meet,” Ward said. Ward said other guests survive on fixed incomes such as disability or social security. “The economy, up or down, really doesn’t affect these folks that much,” Ward said. With or without a good economy, Ward said RIFA still will be there to help those in need. “We’ve never run out,” Ward said. “His storehouse doesn’t run dry. We always have enough.” To find out more about the soup kitchen including volunteer and donation opportunities, visit www.rifajackson.org.