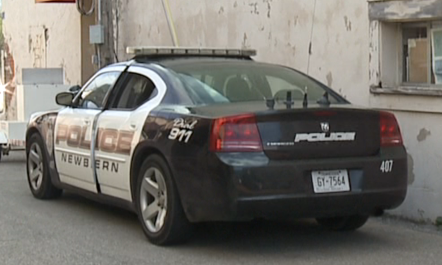 NEWBERN, Tenn. — The Newbern police chief has been placed on administrative leave without pay after allegations from officers of a hostile work environment. Chief Doug Robertson has held the title for about nine months, according to the mayor of Newbern, Olen Parker. The suspension is planned to last 14 days, after which the chief is expected to return to duty. “I asked him to turn in his badge, his sidearm, radio and vehicle,” Parker said. Two officers, Sgt. Robert Harrison and Lt. Rodney Wright, first filed the complaints to the city earlier in the year. In their reports, they detailed instances where the chief instructed them to falsify payroll records to prevent overtime pay, punished employees at his own discretion, and rewarded officers for the number of traffic tickets they brought it. Also, it was stated that the chief held favoritism for younger, newer officers over their older veteran co-workers. One report stated that new grant-funded body armor was given to all officers except for one. Jason Roberts, city recorder, said body armor does have an expiration date, but he did not believe the oversight was a personal attack from the chief to endanger the officer. “I believe he is due a vest,” Roberts said. “We have directed the person over the grant to acquire him a vest.” The chief is expected to return April 20, according to the mayor. If no improvement is demonstrated, he said additional disciplinary action could be taken, up to the point of termination.