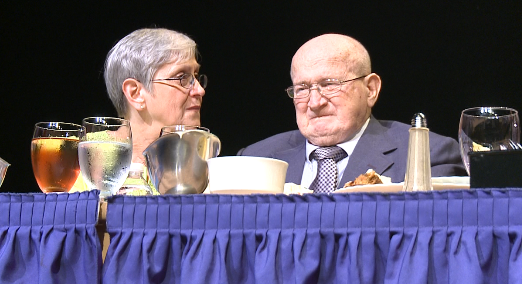 JACKSON, Tenn. – The 30th Annual Jackson-Madison County Sports Hall of Fame banquet was like no the other. A new cast of faces were inducted, and a new award was presented. Boxing legend Rayford Collins received the banquet’s first-ever Lifetime Achievement Award. “It’s a miracle he’s here,” said his wife Rhonda Collins. Rayford’s heart attack scare last week didn’t stop the former Golden Gloves champion from attending the banquet. The crowd erupted with a standing ovation for Collins before and after his award presentation. Collins’ award was just the beginning of special moments at the Carl Perkins Civic Center. Former JCM and Ole Miss standout Cody Ridegeway was the first 2015 Hall of Fame inductee to take the stage. “Something you don’t think about. You play for the love of the game,” said Ridgeway. “This is the culmination of a lot of hard work.” Joining Ridgeway in the 2015 Hall of Fame Class is Rick Rudesill, Doris Scoggins and Lonnie Searcy, Jr. “When I came to Union, there was no one on campus like me,” said Searcy, Jr., who joined the Bulldogs on a full athletic scholarship as the first African-American athlete. College and high school student-athletes were also honored throughout the night.