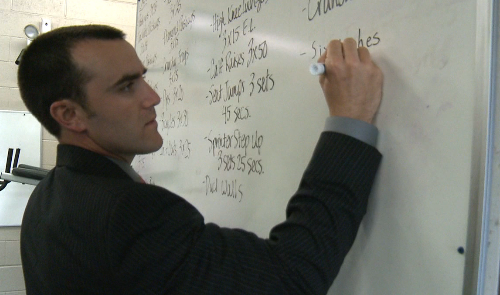 JACKSON, Tenn. – Liberty Tech’s head football coach Tyler Turner isn’t wasting any time as the new leader of the Crusaders. After being introduced as head coach on Thursday, Tyler met with his team for the first time on Friday. “We just have to continue building with what was already in place. Coach [Steve] Hookfin has done an outstanding job over his time here building a solid program,” said Turner. The Obion County graduate added: “Spring ball is right around the corner. We have to hit the ground running. I know they’re excited. I’m ready to get going.” Tyler’s primary responsibilities at Wynn High School in Arkansas were defense. He helped take the program from a previous four-year record of 15 wins and 26 losses to a current four year record of 42 wins and nine losses. “I was a great football program with a great coaching staff. But I always said when the right job opens up in West Tennessee, I want to get back close to home.” Turner is excited to be back in West Tennessee, and wants his team to embody class this upcoming season. “I want them to worry about what we can control. Worry about us. The character on the field and class on the field is what we are going to instill into our players.”