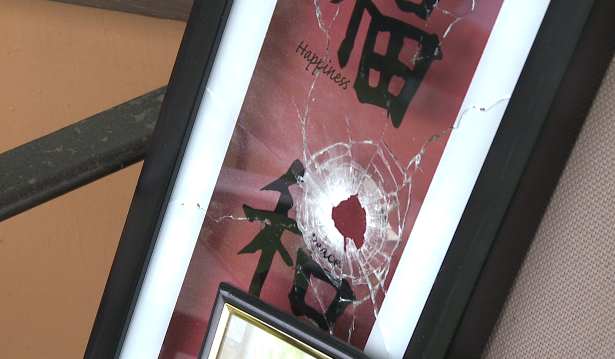 EAST JACKSON — More than 20 shots were fired into two different homes Tuesday night in east Jackson. As of Wednesday, police said they have made no arrests and aren’t releasing whether they have any suspects. Those who live in the neighborhood said they’re now scared for their lives. “I don’t like living in my home and wondering from one day to the next is it going to be shot up,” Charlene Crowder said. Residents along Sweetbay Drive and Briarwood Lane said they don’t know why this type of violence is happening in their neighborhood, but they want it to stop. “I never thought that this would happen to me, so it could be anybody at any time,” Crowder said. Crowder has lived in her home on Briarwood Lane for more than 40 years. Tuesday night, a stray bullet pierced her front window. “I didn’t move until I heard the shots stop firing because you don’t know, and then when I heard it go through the window I really stopped moving — I was kind of stunned,” she said. Crowder said the bullet went through two of her walls. “It was a ‘ping’ noise, and then you could hear the window shattering, and then it went through two pictures,” she said. She said the shooting was bad enough, but knowing the gunman is still roaming the streets makes her scared for her life. “I don’t want to live my life scared to get up and walk to the bathroom or walk to my kitchen, because if I had been walking in the hallway it would’ve hit me in the head — it was head level,” Crowder said. Around the corner on Sweetbay Drive, Barry Booker said he heard the gunfire. Most of the shots hit his next-door neighbor’s house. “When this house got hit and mine didn’t, I felt kind of lucky because this is my son’s room right here,” Booker said. Both Booker and Crowder said they try not to think about what could have happened. “It’s still scary,” Crowder said. “I’m hoping and praying that somebody will come forward because somebody knows something.” Jackson police say no one was injured in the crossfire. If you have information that could help solve this case, call Jackson-Madison County Crime Stoppers at 731-424-TIPS (8477).