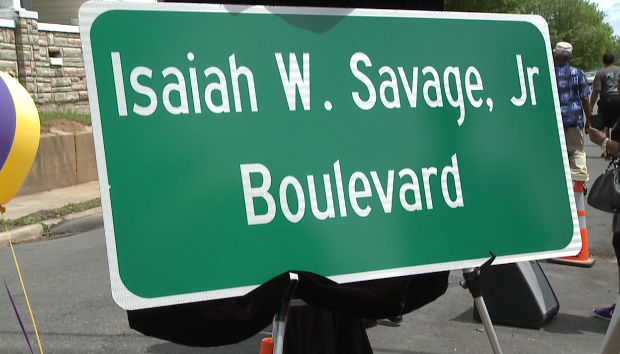 EAST JACKSON — The city of Jackson dedicated a street Saturday morning to a Hub City trailblazer. A man whose family says helped countless people was honored Saturday morning as the city held a dedication of Monroe Street as Isaiah Savage Jr. Boulevard. “We’re so happy to know that the neighborhood supports the idea and thinks it’s fantastic, and I do too,” Isaiah’s widow Margaret Savage said. The idea came from Margaret and Isaiah’s great grandson Byron Elam. “He deserved this and much more, so I’m very happy, very elated to have this finally happen,” Elam said. Elam said he approached District 2 City Councilman Johnny Dodd last March to see what steps he needed to take for his idea to become reality. “It was difficult work, it was stressful work, but it was a labor of love,” Elam said. “And to finally see it done, I can rest a little bit easier tonight because this is something I’ve been working on for a little over a year now.” Savage was born in Jackson in 1920. Among his plethora of accomplishments, he was a Lane College graduate, World War II and Korean War veteran, owner of the once popular Savage’s Grill, a teacher, civil rights activist and a man of the people. “He meant so much to Jackson because he loved Jackson and he did everything to enhance Jackson,” Margaret Savage said. The Savages have lived in their Monroe Street home for 47 years and said Isaiah will now live on there forever. Savage said those who knew him still remember him as “chief.” The city council unanimously approved the dedication in September. Family members said the two street signs will be put up on Monday.