Flood waters cause sinkhole in Henderson 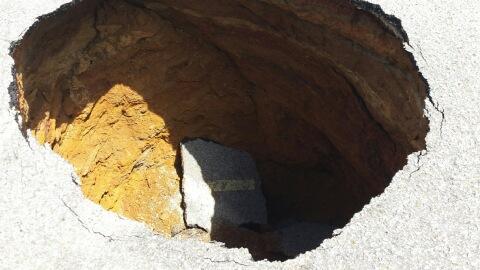 “When water backs up on it, it’s got to find a weak place,” Naylor said. “And when it finds a weak place, it continues to work on it until it gets to a place where it can go.” Naylor said the original hole was about 8 feet wide and about 13 feet deep. As the water underneath began to wash the dirt away, the size and damages grew significantly. Because the hole formed on private property, the owner had to pay for Monday’s repair. It ended up costing Miller’s Big Star around $15,000. “All I know about the hole is we came by here Saturday and seen them working on it — it was about 30 feet deep and 10 foot across,” said Neal Kinchen, a customer of the store. Naylor isn’t sure how long the repairs will take. “It’ll have to sit a while and settle and refill before we can actually pave it, so it’ll be a little while,” he said. Henderson Mayor Bobby King wouldn’t talk on camera but told us he isn’t concerned about more sinkholes developing around the city.