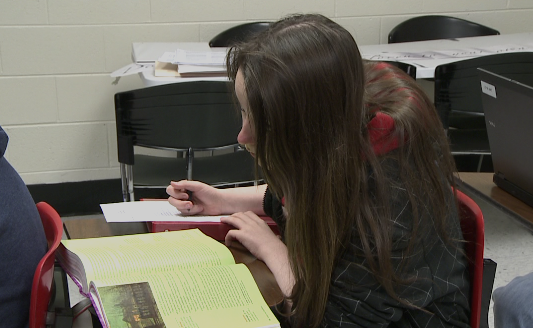 JACKSON, Tenn. — A bill headed to Gov. Bill Haslam’s desk would change graduation requirements for Tennessee high school students. Kids would have to pass a partial version of the test people take to become U.S. citizens. “I think that’s a wonderful idea,” Thomas Hardin, of Jackson, said. High school students may have to brush up on U.S. government before graduation. New legislation approved in the state House and Senate would require students to pass a partial version of the U.S. citizenship and immigration services‘ civic test before getting a diploma. Hardin wants his grandchildren to understand U.S. government. “Knowing our history is one of the very most important things we need to know,” he said. Under the bill, school districts would select 25 to 50 questions from the citizenship test. It asks questions such as what is an amendment, what month do we vote for president, and who signs bills to become laws. Madison Academic High School Principal Janice Epperson stated in a release: “Economics and government is a requirement for all Tennessee graduates. As educators, we feel these topics can be incorporated in the classroom setting without the additional testing burden. Additionally, teachers/administrators will be responsible for administering, grading and possibly composing the tests. Further, retesting and monitoring simply adds more paperwork to educators‘ workload. Seniors will be placed at risk of not graduating at the end of their senior year. There is no test required to be a citizen of the U.S. if you are born here. We are now thinking about giving current citizens a test to be a high school graduate. Based on this information it appears more research is needed before a decision should be made.” Hardin said he supports the bill. “We need to know where we came from and to stay where we’re at,” he said. The legislation would require students to answer at least 70 percent of the questions correctly in order to pass. Students would be allowed to retake the test as often as needed. The bill now heads to the governor‘s desk for approval.