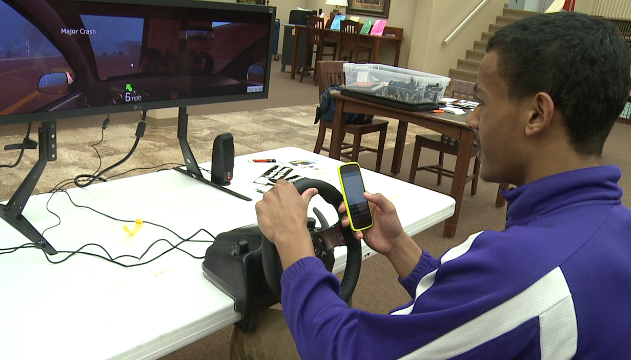 UNION CITY, Tenn. — With prom and summer break just around the corner for many West Tennessee students, local officers are doing what they can to drive home the risks by using a video game-like simulator. In Union City, officers showed some of those students Wednesday just how out of control they are if they’re impaired or distracted while driving. It looks like a video game, but it is an eye-opening experience for teen drivers. “There are police check points, there are field sobriety tests, it shows you being taken to a jail cell,” school resource officer Raphe Whaley said. Whaley said the simulator puts the teens through what can really happen while they’re out on the road. “When they had the police officer come up and the check points, even though it was just a screen it was intimidating because that’s just something you don’t see every day,” senior Davis Odle said. Odle is graduating and headed to prom this weekend. He said the timing is perfect for him and his classmates. “I was just glad they brought it here because it really got to show the students as well as myself the troubles of drinking and driving, how difficult it can be and all the trouble you can get into,” Odle said. Whaley said the simulator is on loan with the Union City Police Department this week. “I’ve asked just about every class that’s been in here how many of you text and drive, and virtually every student raises their hand,” Whaley said. Whaley said 82 percent of the students in West Tennessee who have already experienced the simulator said their mind has been changed on distracted driving. The $12,000 simulator was paid for by a grant from the Tennessee Governor’s Highway Safety Office. It will be at Obion County Central and South Fulton High School the rest of the week.