Man pops the question in a larger than life way 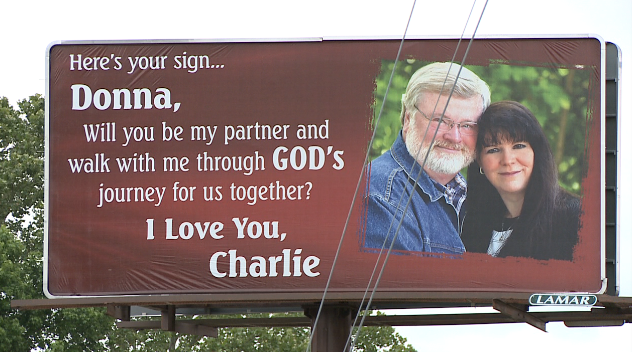 MILAN, Tenn. — A Mid-South man takes his love public Thursday morning with a larger-than-life marriage proposal. He popped the question to his girlfriend of two years with the help of two billboards along Highway 45 in Milan. “I wanted it to be big,” Charlie Hoots said. “I wanted it to be bigger than life.” The two massive billboards shadow the road as thousands drive past, but its message only targets one person. “I’m putting her on a pedestal, that’s the way I feel about it,” Hoots said. “She’s my princess and I love her to death and I want to spend the rest of my life with her. I can’t think of a better way to do it.” Hoots said he and his girlfriend, Donna, met on the online dating site, Christian Mingle two years ago. As talks of marriage came up he said she was looking for a sign, something he took quite literally. “It just came to me one day,” Hoots said. “I need to put a billboard up to do this and give her, her sign.” It is a sign many said they may not have thought of at first, but could see themselves doing. “When you have a woman you love you’re just proud of her,” John Wheeler who lives across from one of the billboards said. “You want the whole world to know and you just want to show her off.” Although many may think it is sweet, Hoots said this may have been a little overwhelming for the love of his life. “She’s been a little distant and little aggravated, not wanting to talk,” Hoots said. “So I haven’t gotten an answer to the question yet.” As he waits for that “yes”, he said he wants Donna to know although this was over the top it is the best way he knew to show her his love. “I want her to understand that this is a life-impact thing for me,” Hoots said. “I want her to be happy with me and I want us to be happy together forever.” Hoots said he purchased the billboards to stay up for 30 days but thinks they will probably be taken down over the next few days.