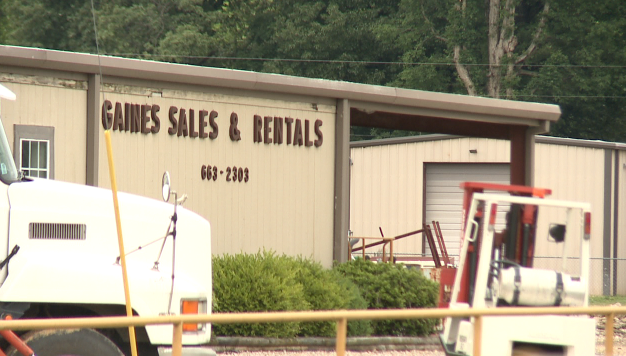 BELLS, Tenn. — Vandals go on a joy ride at a Crockett County business early Monday morning, causing thousands of dollars in damage and stealing equipment. The owner of Gaines Sales & Rentals along Highway 412 said when he got to work, he found his front gate smashed open and multiple trucks and tractors still running in the parking lot. Now he hopes someone traveling along the busy highway saw the vandals in the act. “When I got here, the gate was open and all the equipment was scattered all over the yard,” owner Robert Gaines said. “Someone has got some mechanical experience, because they did know how to get into it and and cut the wires and tie the wires together to get it started,” he said. Gaines said the vandals hot wired and then drove in everything from a tractor trailer to a street sweeper. “It appears they just did a joy ride,” Gaines said. “They got it in the mud and it won’t move. They got it stuck.” Now left digging out, Gaines said damages will be in the thousands of dollars, not including a motor the vandals stole right off his boat. “It’s real disgusting and aggravating,” Gaines said. “It’s going to be costly, too.” Gaines said this isn’t the first time he’s been burglarized over the past 22 years, but he hopes it will be the last. “You’ve got a fence, a gate, and it’s locked,” Gaines said. “My old saying is ‘locked keeps the honest person out,’ but if they want in they’re going to come in.” As thousands drive past Gaines’ business day and night, he believes someone had to have seen the vandals in the act. “It had to have happened in the wee hours of the morning,” Gaines said. “I’m surprised right here on this highway as busy as it is that someone didn’t see them.” If you have any information about the vandalism or may have seen anyone at Gaines Sales & Rentals early Monday morning, you’re asked to call the Crockett County Sheriff’s Office at 731-696-2104.