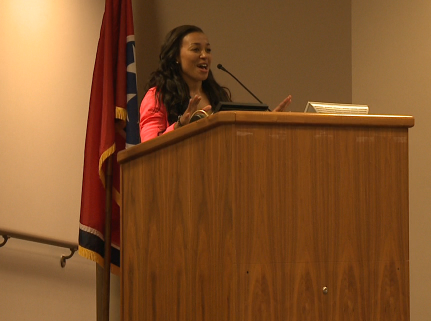 MARTIN, Tenn. – Heather Butler’s name is plastered all over University of Tennessee at Martin’s basketball program. The 2014 graduate holds UT Martin records for single game points, single game field goals attempted and single game three-point field goals made just to name a few. UTM announced on Wednesday Butler will be joining the women‘s basketball coaching staff. “I prayed about it and thought about it for so long, but I know now this is what I’m suppose to do for the year.” said Butler. “He {Kevin McMillian} approached me because my plan was still to go overseas in the fall.” Butler’s new role with the Skyhawks doesn’t mean she’s hanging up the shoes. She describes it as taking a break. “I’m still going to be training. It’s just like taking a little breather,” Butler added. “Then after this year, I’m going to see what’s going to happen next for me. Whether it’s playing overseas again, which I would like to do or assisting again.” Butler’s former head coach Kevin McMillian is excited to have one of his best players ever help out the program. “Being able to add Heather to our program is not only a tremendous opportunity for her, but UT Martin as a whole,” said McMillan in the school’s news release. “Heather has taken home nearly every honor possible from being a WNBA player to being named an Academic All-American and OVC Scholar-Athlete. We are happy to jumpstart her coaching career while finding someone who knows our system and program from the inside and out. We look to her not only to help in the X‘s and O‘s part of the game, but relate to the players from the perspective of the student-athlete.”