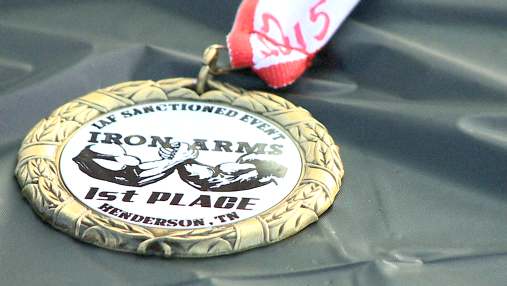 HENDERSON, Tenn. — All challengers stepped up to the table Friday night at Chester County’s Relay for Life to prove their strength. “Kids, women, men — everybody loves the sport of arm wrestling,” Iron Arms founder Dusty Walker told WBBJ 7 Eyewitness News. “Even if you don’t arm wrestle, most people like to watch it.” Iron Arms is the only sanctioned arm wrestling group in West Tennessee. “I talked to a guy who said we could get it sanctioned and put on the competitions here, and it kind of just blew up from there,” Iron Arms participant Carrie Walker said. They said even though they have only been around a few years, the community’s response has been huge. “When people saw the crowd that it brings and the support that it got, that’s when I guess it took off,” Dusty Walker said. Organizers said while it is nice having arm wrestling in Henderson, they agree pulling for a cause is even better. “It’s pretty amazing. We were talking about it on the ride over here and we were excited,” Carrie Walker said. “We couldn’t believe that what started out in our little community has grown and grown and that we’re able to give back.” “You want to give back to the community in a small town like this. That’s what we do,” Dusty Walker said.