A regatta like no other takes over Discovery Park 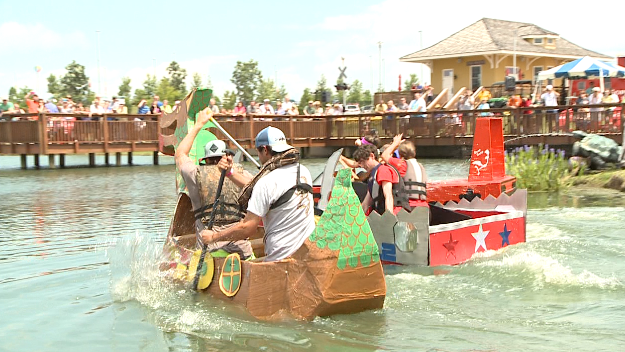 UNION CITY, Tenn. — It was a one-of-a-kind competition in Union City Saturday morning at the Discovery Park of America. Dozens took to the water using only cardboard and duct tape to stay afloat in a regatta like no other. “We encourage them to get as creative as they can,” John Watkins with the Discovery Park of America said. “We’ll see who’s going to float and who makes it around the course.” Cardboard boats in every shape, size and design adorned the water. “A lot of measuring, cutting and re-taping and measuring again,” participant Doug Roth said. Others say it took them hours to put things together. “We spent about 30 hours building this thing in my garage,” David Harris said. “Lots of contact cement, lots of cardboard and lots of time.” From business colleagues to families, it was time spent together to paddle past the competition. “We have been working on the bat boat, and we’ve been building it together all week and the boys have helped paint it and construct it,” Tori Cole said. But although many boats splashed their way to the finish line, others saw a soggy finish. “Oh, it was awesome! I’m soaking wet,” Greg Johnson said. “The wind’s blowing, but we had a blast. It was fun out here today.” But no matter how things ended up, the builders, rowers and captains say they’ll be ready to launch again next year. “I think it’s something that needs to continue year after year because it’s very unique,” Roth said. “Obviously by all the folks that are gathered around, it’s something that will grow.” More than 15 boats took part in the regatta this year, many of them winning awards ranging from most creative to the Titanic award for the most spectacular sinking.