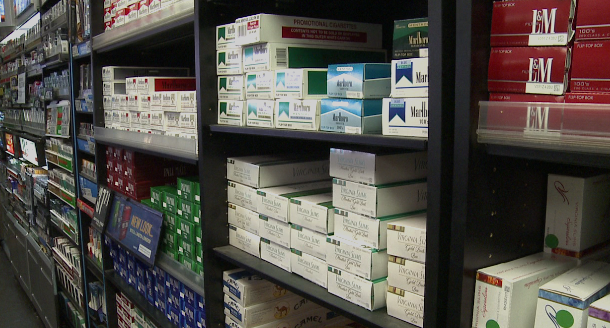 JACKSON, Tenn. — A watchdog group criticized Tennessee‘s plan to raise prices on cigarettes, calling it a “hidden tax increase.” A new state law requires retailers to charge smokers at least 15 percent more than the wholesale cost. Stores get to keep the surcharge. Kelly Benson manages the Smoke Shop on Old Hickory Boulevard. “I just know that we’ve always priced them as low as the state would allow us to,” she said. “We’re going to continue to do so.” The Beacon Center of Tennessee called the markup a “hidden tax increase,” except proceeds funnel to retailers. “Basically, that’s a rip-off,” Thompson Adeniran, a smoker, said. Adeniran is trying to quit smoking and said the price increase is not fair. “They’re too high anyway, so that’s why that’s another reason I’m fixing to stop smoking, cause they’re high already as it is,” he said. Stores can now charge 41 cents per pack to pad their profits. That jumps to 56 cents for the 2015-2016 fiscal year. Prices will increase another 10 cents the next year, and in 2017 retailers can charge 76 cents per pack. “I’ll probably have to cut back on some other stuff, but I’ll probably more than likely still be smoking,” Frank Butler, a smoker, said. Benson said she hopes the Smoke Shop does not see a change in business because of the new law. “I hope that they get good, quick, efficient service and always come back,” she said. The increase takes effect July 1.