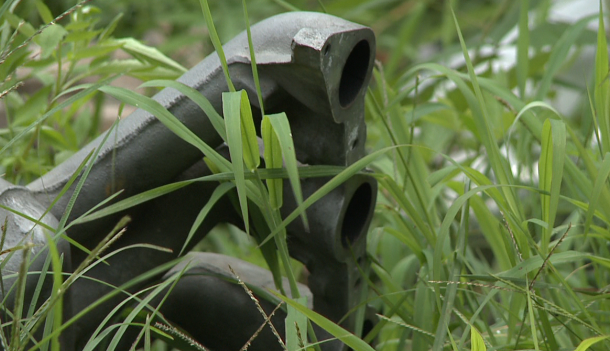 HENDERSON COUNTY, Tenn. — A Henderson County man is behind bars on charges of stealing 40 catalytic converters from one business. Christopher Howard was arrested over the holiday weekend for the June crime. Investigators believe Howard targeted a mechanic’s shop located on Broadway Road South. Deputies believe Amanda Jones may have been Howard’s accomplice during the burglary. Capt. Tracey Grisham with the Henderson County Sheriff’s Department said a warrant has been issued for her arrest. Shop owner Johnny Cagle told investigators Howard had worked on the shop’s lawn before the burglary. Catalytic converters are known for being an easy target to steal and sell for profit, according to investigators. “They’re not cheap,” Grisham said. “There have been streaks where they’re a hot item to sell. They’re easy to take to the recycle centers.” The car part is required by law for all cars. “It collects all the carbon monoxide in your exhaust system,” said Jack Ruppert, who works down the road from where the burglary happened. Cagle said the value of the theft is around $3,000. Cagle said Howard broke in through a locked door in the back of the building. He plans to add security cameras to monitor the shop. Investigators tracked the stolen items to Howard from where they started showing up. Grisham said investigators discovered some of the parts at nearby scrapyards. A preliminary report stated Howard even tried to ditch five at a time at some scrapyards. Anyone with information on Jones’ whereabouts is asked to call the Henderson County Sheriff’s Office at 731-968-7777.