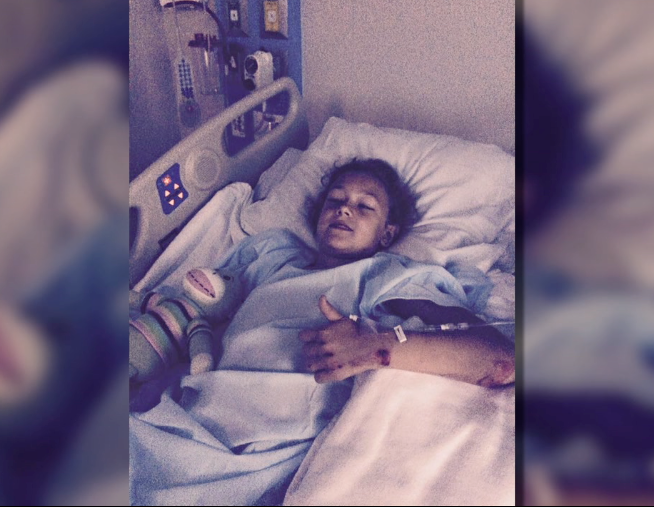 GIBSON COUNTY, Tenn. — Deputies are looking for a woman they say is responsible for a Sunday hit-and-run crash that resulted in a man and a 9-year-old girl being airlifted to Memphis. The wreck happened around 6 p.m. when a pickup truck struck a motorcycle at the intersection of Highway 187 and Highway 79 just outside Humboldt, according to Sheriff Paul Thomas. The man driving the motorcycle and a 9-year-old girl who was riding with him both were injured. They later were airlifted to Regional One in Memphis. The woman driving the truck got out, looked at the man and girl, then drove away, according to the sheriff. The pickup truck the woman was driving is described as a maroon or purple Dodge Dakota or possibly a Chevy S-10. Officers say Mike Doss was driving down Highway 79 on his motorcycle with his nine-year-old neighbor, Paige Helton, when a woman ran the stop sign at the intersection at Highway 187, colliding with the motorcycle. Doss lives next door to the girl’s grandmother, Sheila Inman, who says her granddaughter had never ridden a motorcycle before. “Mike was out mowing the yard and Paige had been wanting him to take her for a ride on the bike for weeks now, and he told her that as soon as he got done mowing he would take her for a ride,” Inman said. “He was just going to take her around the one block, and we get a call that there had been an accident,” Inman said. Gibson County Sheriff Paul Thomas said the woman driving the pickup that hit them didn’t stick around. “After the accident, they left heading in towards Humboldt heading West on 79,” Thomas said. Paige’s grandmother was the first family member to arrive at the crash scene. “I just don’t understand how anyone could leave a child laying in the middle of the road hurting like that, screaming, you know, and knowing that Mike laying there unconscious,” Inman said. Paige and Doss were airlifted to hospitals in Memphis while the family was left with a lot of questions about the driver. “If you got a kid, how can you — what kind of mom are you?” Inman said. “I just want this person that’s done this to realize they’re going to have to face the music on it at some point, so it’s best they just go ahead and come in, turn their self in here to the highway patrol, to a local agency,” Sheriff Thomas said. Paige and Doss are expected to recover from their injuries. Anyone with information about the wreck or a vehicle matching the truck’s description is asked to call the Gibson County Sheriff’s Office at 731-855-1121.