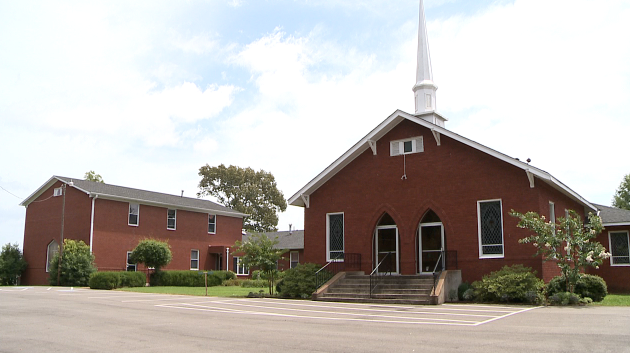 MADISON COUNTY, Tenn. — A West Tennessee house of worship is now a crime scene after deputies say vandals commit a heinous act. Church members arriving for Sunday service at Brown’s United Methodist Church say they were greeted by trash covering the grounds and feces smeared on the doors. “One of our church members got here to do a little work prior to church,” church member Frank Dodson said. “When she walked up, she found fecal material on the doors.” Besides the feces smeared all over the front and side doors, church members say their pavilion and playground also were targeted, with vandals smashing light bulbs and ripping down gutters and swings. “When they do something like this to a church, God’s house, it really gives you a violated feeling,” Dodson said. Church members say although most of the damage to their church was minor, they feel they’re now part of a trend as more and more churches across the United States and West Tennessee are being vandalized. “Several years ago, these things never happened,” Madison County Sheriff’s Office Spokesperson Tom Mapes said. “You don’t know if it’s cult influence or someone just being bored, but you hope it just doesn’t continue.” As investigators continue to gather evidence to find those responsible, they believe faith will prove more powerful in the end. “Knowing the Christian community at Brown’s Church, I know those folks are probably ready to forgive, praying for the suspect, whoever they are,” Mapes said. The church estimates the damage will cost between $200 and $300. If you know who’s behind this crime or have information that could help, call the Madison County Sheriff’s Office at 731-423-6000.