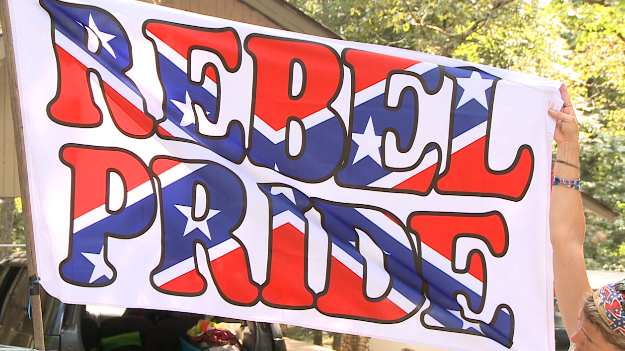 BENTON COUNTY, Tenn. — Protesters rallied behind the Confederate flag Sunday and protested any possible change to the name of Nathan Bedford Forrest State Park. The Tri-County Confederate Warriors are citizens of Henry, Carroll and Benton counties who have come together in light of the Confederate flag controversy. “The flag is not racism. It’s not hate. It’s heritage,” Tri-County Confederate Warrior administrator Kimberly Cook said. Cook said she is fed up with people trying to take away what she says is a part of her Southern legacy. “They are trying to take our Confederate flag, and that is our heritage,” Cook said. “That is what we’ve stood for.” Cook formed the Tri-County Confederate Warriors group earlier in July. They drove through Benton County on Sunday, waving their Confederate pride on the back of their cars in protest of changing the name of Nathan Bedford Forrest State Park. Forrest was a Confederate general, noted slave trader and leader of the Ku Klux Klan. “Today’s event is just to show that we support Nathan Bedford Forrest Park and we don’t want it changed. We want it to stay as it is and get better,” Cook said. One of Forrest’s descendants, James Goforth, also rallied and is asking one question. “When people’s rights are being taken away little by little, when is it going to stop? What’s it going to stop at?” he said. For Bryan Batchelder, opportunities like this allow him to stand up for what he believes in. “I’m just sick and tired of standing by watching our government and people tell us what we can do. I mean, it’s a free country,” Batchelder said. The crowd started in Camden and rallied to the top of the park. There were almost 100 cars that came out Sunday for the protest.