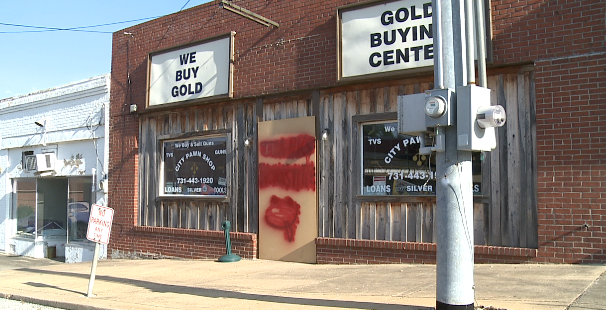 BROWNSVILLE, Tenn. — An early morning break-in at a pawn shop in Brownsville now has guns in the wrong hands. Police say they’re now looking into possible ties to other crimes in the area in hopes of determining who’s responsible. “Our main concern is getting these guns off the streets and keeping everyone safe,” Assistant Police Chief Kelvin Evans said. The entrance to the City Pawn Shop in Brownsville is now boarded up after burglars entered Wednesday morning and took off with stolen pistols. Police say three guns were taken from the shop, but they have not determined any possible suspects at this time. “The weapons were put on display and they were unloaded,” Evans said. “There were a total of six weapons in the case, but only three were taken.” Police say the stolen guns were worth more than $1,000. They also said the person or persons responsible were able to get away quickly and may have been there previously to canvass the place before breaking in. “From the evidence, going and getting exactly what you need and out of the business and leaving tells us somebody knew exactly what they were going to get,” Evans said. Brownsville police say they are working closely with the Haywood County Sheriff’s Office in another crime that may be related to the stolen guns, but as of now they are asking for the public’s help to find those responsible. If you have any information, you can call Crime Stoppers at 731-442-2274 and you could qualify for a possible reward.