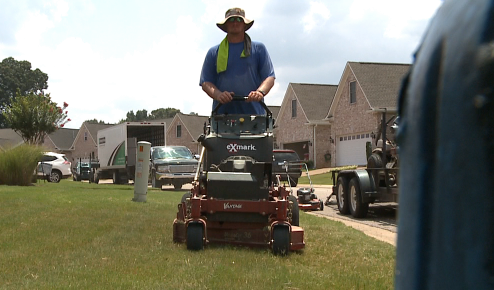 JACKSON, Tenn. — A Jackson business owner said the excruciating heat isn’t keeping his company from work. But it changes the way Groundworks Jackson does business. Landscapers said working in the heat is as much a part of the job as pushing a mower. “It goes with the territory. It’s understood,” Groundworks Jackson owner Michael Jenkins said. Staff said that doesn’t make working in the heat on one of the hottest days of the year any easier. “If you weren’t out and getting acclimated, then on days like today they could easily have you laid out with a heat stroke,” Jenkins said. He said hiring someone mid-summer could be a safety concern since they haven’t been working in the heat gradually. Jenkins and his three-man crew operate on a system when the temperatures are dangerously high. “The guy on the mower, every hour on the hour he’s taking the guys weed eating or blowing a bottle of water,” he said. Each work day starts at 5:30 a.m. for Jenkins and his crew. He said they stop once the work is done or when there is a rain delay. On Wednesday, one of the hottest days of the 2015 summer, mowing, blowing and weed eating 52 yards at a north Jackson subdivision are only a fraction of the day’s work for the Groundworks crew. Gary Carver has lived in the Emerald Ridge subdivision for eight years. “They’re the best group we’ve had. Not the best looking group, but they’re the best working group we’ve ever had,” he said. Heat can impact staffing for the local business owner. “You’ve got to be overstaffed in times like this because your production’s going to be slow,” Jenkins said. Jenkins said most of his crew wears long pants and lightweight long-sleeve clothing to keep cool in the heat.