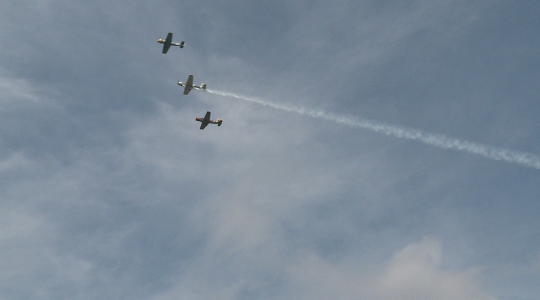 LAUDERDALE COUNTY, Tenn. — Thousands made their way from across the county to celebrate the 70th anniversary of the end of WWII and remember what role West Tennessee played in the skies at the Wings Over Halls Air Show. “The airplanes, you listen to them and they’re such a reminder of World War II,” air show coordinator Pat Higdon said as she listened to the B-17s soar through the air. Higdon has been coordinating the air show for the past 16 years. Wings Over Halls is held at Arnold Field, formerly a part of the Dyersburg Army Air Base. “This was a B-17 training base during World War II, and we do it for the historical advantage because we want families to know what was on this base during World War II,” Higdon said. Edward Henning Sr. served in the army during the war in West Tennessee. “I was on a B-17 tail gunner stationed here in Dyersburg in Fall of ’44 and Spring of ’45,” Henning said. Henning was the only surviving pilot from his troop after a tragic training accident killed his fellow servicemen. Now living in Pennsylvania, he said he comes back as often as he can and loves how many people come together to remember. “That shows that they know what took place years ago,” Henning said. “If they didn’t, they wouldn’t be here at the air show.” For many air show goers, the sounds of these planes bring together young and old. Morris Ray has been flying for more than 60 years and has been performing at the Wings Over Halls Air Show since it started. “I particularly like to see the young people, the kids, come out, because that’s where the future of aviation is,” Ray said. “I saw the eyes light up in children’s eyes and veterans’ eyes, and there is nothing in the world like that,” Higdon said. The air show lasted more than two hours demonstrating flight formations and showcasing aircraft used during the war. All proceeds from the air show will go to fund next year’s Wings Over Halls celebration. While no official numbers are in, coordinators believe they saw more people Saturday than during last year’s two-day celebration.