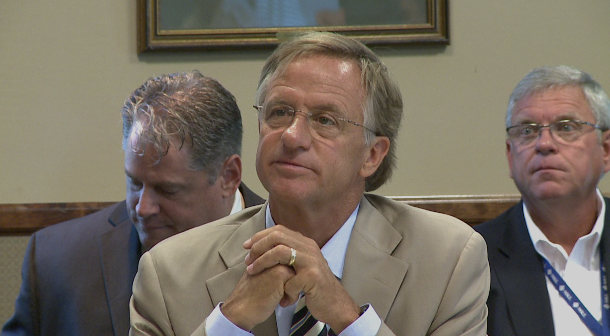 JACKSON, Tenn. — Tennessee drivers could pay more in taxes at the gas pump. Republican Gov. Bill Haslam stopped in Jackson on Wednesday to talk transportation funding as he considers a proposal to increase the state‘s gas tax. “We have less and less money to take care of more and more expensive needs,” Haslam said. Haslam estimated the state has about $6 billion worth of approved projects they do not have funding for. “We could do like Washington and just kick the can down the road, but I don’t think that’s how we want to do things in Tennessee,” he said. Local lawmakers listed off road improvements they said need attention. Drivers said some streets are bad. “The wear and tear over time, it definitely becomes a burden on your vehicle,” Tyler Diffee, a driver, said. Drivers had mixed opinions about a tax increase. “Depends on how much it is,” Lizzie Hodge, a driver, said. “You know, a few cents here and there, you don’t pay that very much attention if it’s for the greater good.” Others said to find the funding somewhere else. “The taxes they need to find another way,” John McKinnie, a driver, said. Haslam said they still have about 12 more stops to make across the state. “We’re having discussions about a lot of different possibilities, but the reality is that nothing comes free,” he said. The Tennessee Department of Transportation said drivers currently pay 21.4 cents per gallon in state taxes. The state has not had a gas tax increase since 1989, according to the governor‘s office.