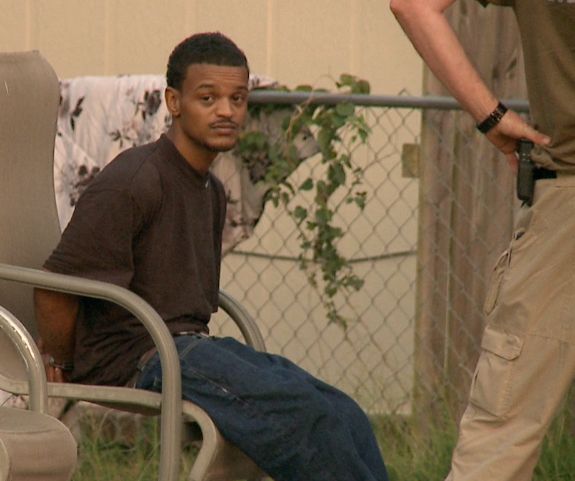 WEST JACKSON — A West Tennessee escapee is back in a familiar place but facing a new charge. Gibson County deputies said they know how Jeffrey Patterson escaped, but they are still trying to figure out how he got all the way to Jackson wearing new clothes and his shackles cut. Patterson made it more than 30 miles after running from the Gibson County Courthouse. Although he’s back in custody, deputies say he’s keeping tight lipped about how he got from point A to point B. “As far as I know he’s not cooperating with anyone that was involved in the capture,” Gibson County Sheriff Paul Thomas said. “He was there, we got him and that’s where he’s leaving it.” The U.S. Marshal’s Service said the family who lived at the home on Tracewood Cove where Patterson was found had just got home when deputies arrived. But the homeowners said they didn’t even know Patterson was there at the time. “The next thing you know, Marshals are surrounding the house,” Timothy Powell, who witnessed the arrest, said. “They got the guy they were looking for. I guess he was in the house hiding somewhere.” Patterson was found still in shackles and wearing new clothes. But how he got to west Jackson from the Gibson County Courthouse is the biggest question. “Obviously he didn’t walk to Jackson, and he got the clothes from somewhere and got the tools to cut the chain,” Sheriff Thomas said. “But the ultimate goal was getting him back in custody, and if that’s where it ends, I’m OK with that too.” Although some of these question may never be answered, Thomas says he’s just looking to the future. “It’s a learning opportunity for us,” Thomas said. “We see where the mistake happened, and we’ll now eliminate it.” After his arrest, officers took Patterson to a Jackson hospital after deputies said he ingested some sort of narcotic. He faces a new charge of escape and is being held without bond.