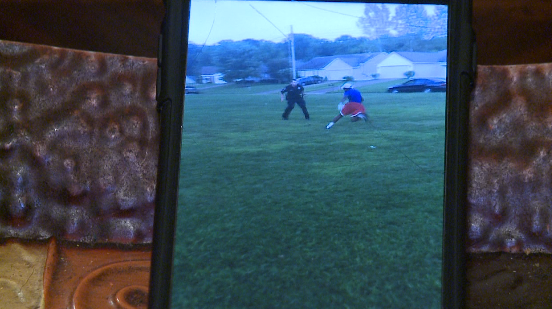 JACKSON, Tenn. — A West Tennessee police officer has a group of teens, well really an entire neighborhood, talking about how he responded to a challenge while patrolling a Jackson neighborhood. North Side High School graduates who were previously on the football team may have met their match Wednesday afternoon. It is a play they said they will not forget anytime soon, surprised by who rolled up and joined in on their game, Officer Robert Groves. “We were just out there playing with the kids in the neighborhood, and we saw them ride up so I was like, ‘I’m gonna get him to come play’,” Tavien Downs said. After responding to a call in the area, the officer did just that. “I squared off with him and ended up getting burned on the pass route, but it was a good showing and I got to meet some of the kids in the neighborhood,” Groves said. Tavien Downs’ mother, Karen, said this one play meant a lot more than just an impressive hustle. “In the wake of everything that’s been going on with the police and young men, I just thought it was a good thing. It’s a sign there is still hope and they don’t always have to be afraid of the police,” Karen Downs said. Groves explained these are the types of opportunities he looks for while patrolling. “It’s good to reach out and show it’s not us verses them. We’re here to help and support the community,” Groves said. For Downs, it is an example of what law enforcement is all about. “It showed every cop is not just a bad cop. There are some good people in the world, and he showed that,” Downs said. Robert Groves has been with the Jackson Police Department for seven years.