Rivals team up to fight hunger 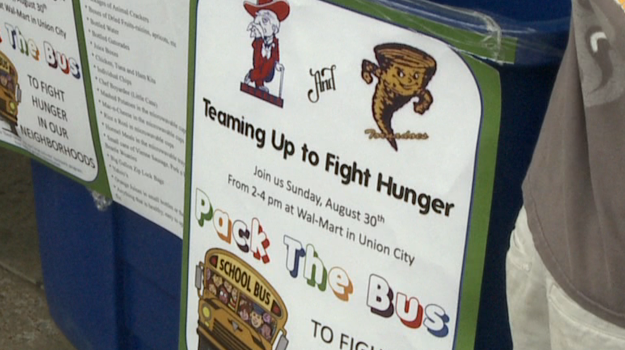 OBION COUNTY, Tenn. — Two West Tennessee high schools have been rivals in just about everything for as long as anyone can remember, but now they are working together to help end hunger in their schools. The Obion County Rebels and Union City Tornadoes have gone from rivals to teammates in the fight against hunger. Together, this week they’re hosting the “Pack the Bus” food-raiser to help kids in their school systems who are at risk of going hungry on the weekends. “Four years ago I took a little girl to go get glasses, and on our way back to school she asked me if she could have the crackers that were in my purse for a snack so that she would have something over the weekend,” Obion County School Health Coordinator Chastity Homra said. “So I made it my goal that following year that no matter what I do I would make sure that the kids in our system didn’t go home hungry,” she said. “So I started the backpack program in the Obion County school system four years ago.” This year, Union City Schools wanted to get involved with the backpack program to make sure all the kids in their community are fed. “We collaborated with the county school, which is a wonderful partnership, and we put this drive together and we are really, really excited about the possibility of this,” Union City School Health Coordinator Kristen Miales said. The Pack the Bus drive raised a van full of food last year, and after partnering with the city they have more than doubled their donations, and the drive is just beginning. “It’s so great to see our whole community come together and realize that it’s more than just a rivalry between two high schools. We can all come together to help for one cause,” said Olivia Davis, 2015 Miss Soybean and an Obion County High School student. The collaboration between the school systems will feed almost 200 kids between the two school systems. Sunday was the first day of the drive, and coordinators say they gathered more than 500 items of food and $2,000 in donations. The food-raiser continues through Saturday, Sept. 5. You can drop off donations at the Union City Wal-Mart or the Obion County School Board.