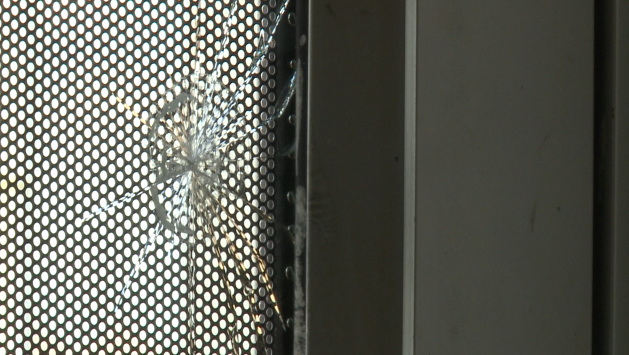 UNION CITY, Tenn. — BB gun vandals are on the run in Union City, where police said homes, businesses and even cars have been shot into since the weekend. Union City Police said it seems like they have gotten at least six calls reporting damage from a BB gun. Already causing thousands of dollars in damage, officers said they are fearful these vandals could soon find another target. “It’s all within a central location within an 8 block radius,” Lt. Andy Gibson with the Union City Police Dept. said. “It happened all at the same time, within two or three days.” Five homes and businesses right in downtown were shot into, according to police. All down the street from each other. “I don’t think they’re targeting anyone,” property owner Larry Mink said. “They’re just going around randomly shooting. Someone is out getting cheap thrills at other people’s expense.” Mink owns two businesses that were affected. “There was one window at one building and then I had another place that called and had a window there that was busted the same way,” Mink said. At most of the businesses and homes targeted, police said a single shot was fired through a door or window. It shattered glass, leaving owners with a big mess. “I’m speculating that it may have happened all in one evening and the property owners are just now finding the damage,” Lt. Gibson said. Union City Police said they believe there could me more victims that have not figured it out yet. “The damage sometimes on a smaller window won’t show up as quick,” Mink said. “If they have their blinds shut or it didn’t break the window completely they won’t even know.” As these owners begin to clean up the mess made by these vandals, their hope is that they do not strike again. “I want them to pay back if they’re caught but I’d rather them catch them to stop any other damage coming up to me or anyone else,” Mink said. If you have any information about this vandalism or if you were a affected and have not yet come forward, you are asked to call Obion County Crime Stoppers at (731) 885-8477.