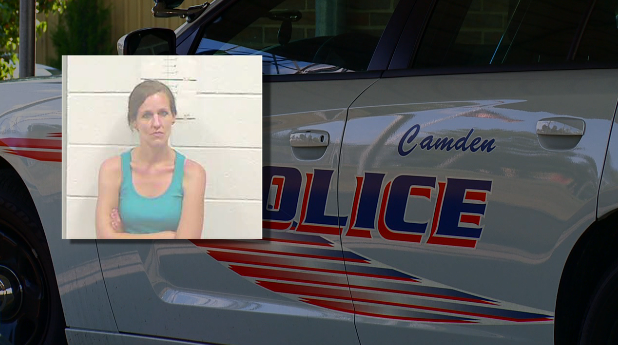 CAMDEN, Tenn. — A new twist comes in a theft case WBBJ 7 Eyewitness News first told you about over the weekend. Six juveniles were arrested between Saturday and Sunday, and now an adult related to the teens is in custody. Officers say she not only influenced the teens but helped them steal. “We’re going to hold her accountable for a lot of this,” Camden Police Department Public Information Officer Jonathan Bailey said. “The juveniles will be held accountable as well.” Six teens and the woman who was supposed to be watching over them are charged in a weekend theft. “As parents, we need to make sure we’re making the right example, and I don’t think that was happening here,” Bailey said. “We don’t believe she was the mastermind. She just made a poor choice to assist in the matter.” Camden police said Danielle Hooten helped the juveniles steal almost $3,000 worth of property from a vendor along the Benton County Bargain Highway. “This man came down here to provide for his family, and he lost a lot of property,” Bailey said. “Although we got a lot of it back, we didn’t get it all back, so he’s going to have to be paid back for that.” Investigators raided Hooten’s home Monday night hoping to find some of that property but instead found a small amount of drugs. “I don’t want anything like that going on here. I don’t need to have that going on,” said Ray Flinn who was Hooten’s landlord. “So I want it all cleaned up and them out of here.” When we went to Hooten’s home Tuesday, a number of people were seen moving things out. They told us the children involved wouldn’t be around her anymore. Police said outside of Hooten, other adults are trying to do what is right. “They were there. They wanted to help find the property,” Bailey said. “Overall, they wanted these children to be punished for their actions.” Hooten is charged with felony theft, filing false statements and six counts of contributing to the delinquency of a minor. She currently is being held at the Benton County Jail in lieu of a $5,000 bond.