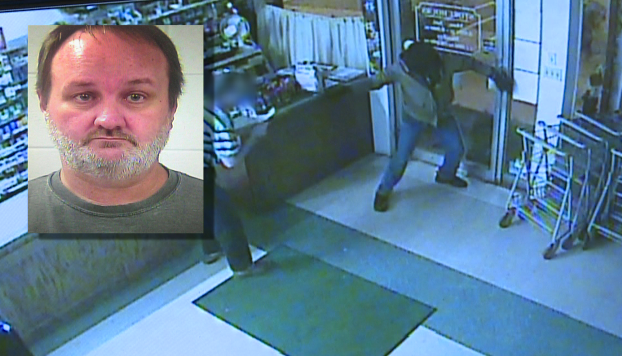 RUTHERFORD, Tenn. — A Gibson County grocery clerk was robbed at knifepoint early Tuesday morning as he was opening up for business. The entire act was caught on camera, which investigators said led them right to their suspect. Police say it started out like any other morning for the manager of the Rutherford Grocery Store, but as he opened the door to start his day they say a masked man followed right behind him, wielding a knife and looking for cash. “He opened the door and walked in, but as he began to shut it the individual ran to the door, pushed it open and forced his way in,” Rutherford Police Chief Adam Branch said. “You can see him with the knife, wielding the knife around.” Rutherford police said the masked man with the knife, who eventually ran away empty handed after an alarm went off, is Johnny Flowers. “It just worked out that we could see his face,” Branch said. “It gave the clerk an idea of who it was.” Investigators said the store clerk knew Flowers from around town, and they eventually found the clothing he was wearing in the video at his house. “He denied it at first,” Branch said. “But after we had talked to him for a while during the interview he admitted that he had done it and he was having financial problems and that’s why he did it.” It was inside a dumper near the store that officers said Flowers dumped his knife after fleeing the scene. But when officers came to retrieve it, the trash had already been picked up. The knife was later recovered, but officers said these types of desperate acts, especially from a local, aren’t something they typically see. “So when we do, it kind of upsets a lot of people,” Chief Branch said. “Everyone kind of gets on edge because it is such a small community and everyone knows everyone.” And for residents like Desiree Kail, who shops at the store daily, it came as a shock. “I have a 6-year-old, a 3-year-old and a 10-month-old,” Kail said. “If that had happened with them in there, I would have been terrified and they would have been scarred for life.” Flowers is charged with aggravated robbery and is being held at the Gibson County Jail. He will be formally arraigned Wednesday.