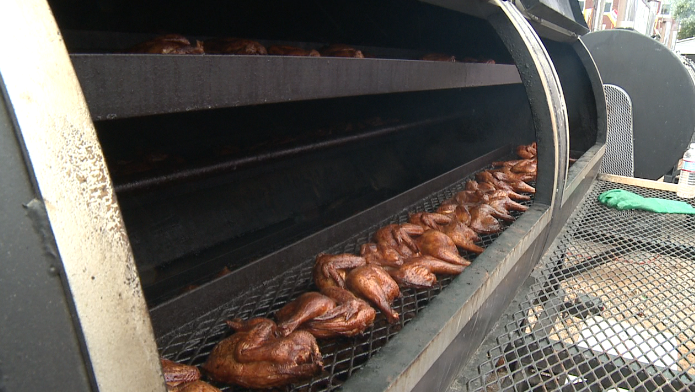 CHESTER COUNTY, Tenn. — A tasty West Tennessee tradition for more than 30 years, the Chester County Bar-B-Que Festival, brings a bit of sweet and smoky to West Tennessee. This year organizers say more people than ever before flocked to the City of Henderson to get their hands on some of the best BBQ around. From fall-off-the-bone ribs to smoked chicken, Johny Farris has been cooking BBQ all his life and has been with the festival almost every year. “We use hickory wood, that’s what really makes the difference,” Farris said. “When it’s done, it will break apart. That’s when you know it’s ready to go.” For two days every September, Farris and his closest friends heat up the smokers and get cooking “We still have big crowds and sell out of all our meat,” Farris said. “We have a good time and it’s just a big community involvement.” Thousands of West Tennesseans fill downtown Henderson every year looking for fun, games, and of course that slow smoked goodness. “We have lines all day,” Donna Butler with the Chamber of Commerce said. “They’ll eventually wrap down the street.” And it takes a lot of hard work to feed the masses. “It takes 175 volunteers to run the pit and to hand out food,” Butler said. With sandwiches piled high, all of the meat flies out of the smoker. “It equals out to about 35 to 38 whole hogs,” Farris said. “It’s a lot of meat and usually it all gets gone.” But although it takes a lot of time and effort to get things just right, Farris said the hours he spends at the festival with his friends makes it all worth it. “A good community involvement,” Farris said. “It brings a lot of people back in town that have moved away and a lot friendships that evolve over the years.” Organizers said they expect to raise more than $30,000 from this years festival, all of which benefits the Chester County Chamber of Commerce.