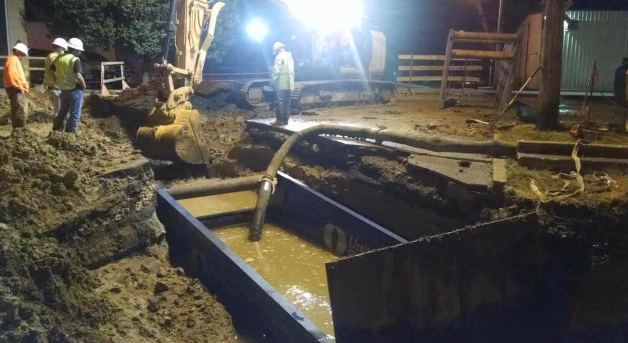 UNION CITY, Tenn. — Thousands of West Tennesseans have their water restored after a water main break Saturday night, but the water is still unsafe to drink. More than 11,000 Obion County residents like Brent Hinson lost access to one of life’s necessities. “I know we were on the phones last night calling neighbors saying, hey the water is out,” Hinson said. Officials said a construction company working on a project accidentally hit a pipe. “We’re building a new underground reservoir to replace the existing one,” City Manager Kathy Dillon said. “Around 5:30 PM our construction crew was digging across Martin Luther King and hit an 8 inch water main,” Union City Water Plant Manager said. Reid said after the water main was hit, the water plant had to shut down, cutting off water to all of Union City until around 9 o’clock Sunday morning. Officials said a community member brought down a machine around 10:30 Saturday night to help drain the water out of the trench long enough to fix the pipe. “The plant is up and running now and all our tanks are full,” Reid said. The damage has had some serious effects on the community. Obion County Emergency Management Director Danny Jowers said all Union City Water customers are still under a boil alert. “The boil water order just affects drinking water. You can shower, you can bathe, you can wash your car or whatever you wanna do with the water – other than drink it,” Jowers said. Surgeries at Baptist Memorial Hospital have been cancelled for Monday due to the alert, as well as many local businesses. “Of course the restaurants have been shut down. One of our largest businesses, Tyson foods, had to shut down their shifts because they use a lot of water so everybody has been understanding so far,” Jowers said. Obion County Schools are also closed Monday. Union City Schools are closed for students, however teachers and faculty will still report as usual. Reid said the water main was fixed by 1:00 AM Sunday Morning. The city is still assessing the total cost of the damages.