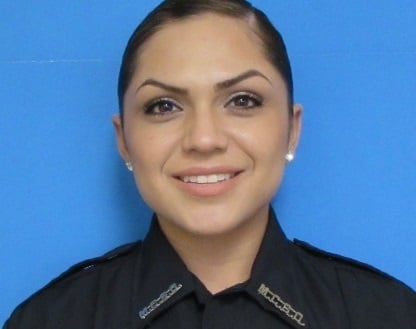 MADISON COUNTY, Tenn. — The sheriff’s office has shared the funeral arrangements for Rosemary Vela. Visitation services will be from noon until 8 p.m. Thursday, and funeral services will be at 10 a.m. Friday, according to the sheriff’s office. Both services will be held at West Jackson Baptist Church, located at 580 Oil Well Road in Jackson. Ronk Funeral Home in Alamo is in charge of her services, according to the department. Father David Graham of Saint Mary‘s Catholic Church in Jackson will represent the Catholic faith, and Manuel Yanez, a family friend from Harlengin, Texas, will represent the Protestant faith. Vela was killed in a car accident late Monday while on duty. The sheriff’s office also has announced the following information: A procession will leave Ronk Funeral Home in Alamo at 10 a.m. Thursday. The travel route is from Alamo to Highway 412 West, exit at Country Club Lane to Pleasant Plains to West Jackson Baptist Church at 580 Oil Well Rd. 11 a.m. — Family only Visitation. Noon to 8 p.m. — Public Visitation Sea of Blue Honorary Motorcade 8:30 p.m. Thursday The travel route is from WJBC to the Highway 45 Bypass, south to Airways Boulevard, turn right on Airways, becomes Highway 70 West to the site of her fatal accident where Chief Overton and Captains Bowles and Heavner will be standing beside the road with a spotlight displayed on a wreath. The motorcade will proceed to Highway 138, turn north to I-40 East to exit 79 and returns to WJBC. The Funeral Service will begin at 10 a.m. Friday at WJBC where Madison County Sheriff John Mehr and Crockett County Sheriff Troy Klyce will speak and MCSO Chaplin Sgt. Alfonso Newbern will pray. Deputy Vela‘s family will provide the speaker and program. The emcee will be Chris Heisler, United States Honor Flag founder and president. The United States Honor Flag is with Deputy Vela now and will be until her internment. After the Friday morning services inside WJBC conclude, these events will happen outside the Church: There will be a 21-gun salute by the Jackson Police Department. The Shelby County Sheriff‘s Office will provide a drum and bugle corps with bagpipes and play Taps. There will be a combined-agencies helicopter flyover. MCSO Sgt. Jennifer Brandon will dispatch the “Final Call” for Deputy Vela. Amazing Grace will be the final song played. There will not be a final public processional. The family has not shared her final burial plans.