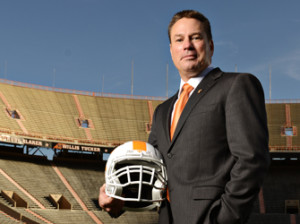 The school announced the raise Monday. Jones’ contract continues to run through the 2020 season.

Tennessee athletic director Dave Hart said in a statement, “We have the right leader to get us to our ultimate destination, and we are rewarding him accordingly.”

Jones is 20-17 in three seasons at Tennessee and 70-44 in nine seasons overall. The Volunteers (8-4) will carry a five-game winning streak into the Jan. 1 Outback Bowl against No. 12 Northwestern (10-2) at Tampa, Florida.

Tennessee’s average home attendance of 100,584 this season was its highest since 2008 and an 11.8-percent increase over where it was the year before his arrival.