HENDERSON, Tenn. – The Mickey Marley era at the University School of Jackson came to a close on Monday.

His 27 years as the head football has resulted in many accolades. The unseen accomplishments are the number of players he impacted to do more.

Chester County head football coach Michael Hodum credits the veteran coach for pushing him to be his best while he was at USJ.

“Win or lose, you can say his kids played really hard and intense,” Hodum said. “He’s always been a mentor to me. Really enjoyed playing for him and coaching against him.

“I’d rather face any coach but him. As far as a chess player, he’s the best I’ve ever faced. I don’t say that because of this moment. I’ve said that many times.”

Hodum played for Marley while he was a defensive coordinator during 1987 and 1988 seasons.

He still remembers the first time the new coach stepped foot on campus.

“He brought a change for us that was much needed. An intensity and toughness that I feel each USJ team had throughout his tenure there,” Hodum said about the 1987 season. 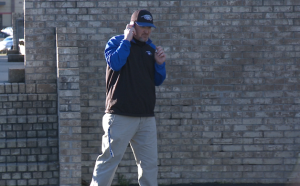 It’s hard to dispute Marley’s legacy. His tenure on the Bruins’ sidelines include 245 wins, 15 district/region titles, and five state championship appearances to name a few.

Marley says he’s lost count on the number of positive messages former players, parents and friends have sent him.

“For all you guys and parents that have been sending those positive emails, I really do appreciate that” Marley told WBBJ 7 Eyewitness Sports. “Lisa [his wife] appreciates it. As we’ve always told you — once you’re a Bruin, you’re a Bruin for life. This is proving it.”

Marley inducted into the Jackson-Madison County Sports Hall of Fame in 2012.