JACKSON, Tenn. — Ruby Hunter sits in a Jackson doctor’s office Friday. It’s a trip she said she’s thrilled to make. “I’m able to walk around, go to the store by myself,” she said. 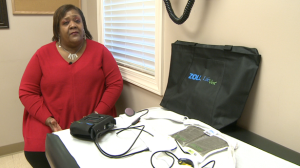 Hunter said seven months ago she couldn’t walk ten feet without having to stop and rest. Hunter said she was diagnosed with congestive heart failure last year.

“When we first met her, she was on a down-hill. We had to stabilize and bring her up healthwise.” Dr. Elie Korban said, who made the diagnosis on Hunter.

As part of Hunter’s treatment doctors recommended she wear a special LifeVest, something she said she wasn’t initially thrilled about. “One hundred and three degrees outside with a vest on and a box. The box weighs three or four pounds, but I still kept it on,” she said.

The LifeVest is designed for heart patients at extreme risk of dying. By monitoring the heart rhythm, the vest can shock you if something abnormal is detected.

That’s what Hunter said happened to her when she laid down for a nap and flat-lined. “Next thing I know I was jumping because it had shocked me back to life,” Hunter said.

Hunter nickanemd her vest “Buddy.” She said she no longer has to wear the device.”From then on I look at life differently — very differently,” she said.

She now has an implantable defibrillator. “If I had took the vest off, I wouldn’t be sitting here today.”