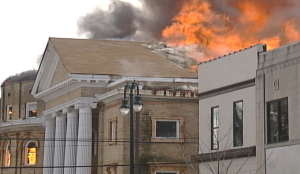 The images are hard to forget as flames shot high above the buildings of downtown as the old First Baptist Church burned.

Since that fire, a portion of the building has been converted to apartments and a park has been constructed.

The owner of the construction company that was overseeing work on the church at the time of the fire said Wednesday that some good has come from the ashes.

“In order to make the best out of a bad situation, we were able to complete the renovations to the building next door,” said John Allen, president of John Allen Company. “Now we have a beautiful building called Suites of Larue, which is a gated apartment building in downtown.”

The old church property sits right beside the apartment complex. A firewall saved the portion of the building where the apartments were developed.