JACKSON, Tenn. — The number of new businesses in the Volunteer State is up, according to a new economic report released Wednesday, and employers are hiring in West Tennessee. 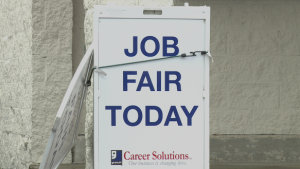 Jamar Guyton interviewed for a job with Corrections Corporation of America on Wednesday. “I’ve been in corrections before and I thought I’d give it another shot,” he said.

Goodwill West Tennessee District Manager Sandra Hickey said manufacturing, retail, food service and hospitality jobs are also available. “If you’re looking for a job, there is a job for you,” Hickey said. “All industries are hiring right now.”

Guyton said his interview went well and that he expects to be back at work in the future. “It’s a great job,” he said. “It’s not for everyone. You have to have the right mindset for it.”

Hughes said they plan to attend seven job fairs in the next few weeks hoping to fill vacancies.