GIBSON COUNTY, Tenn. — A West Tennessee family said they are lucky to be alive after flames swept through their home early Wednesday morning as they all slept. 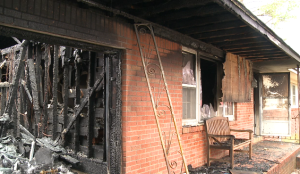 The smoke detectors were not what awakened them but a stranger, a local pastor, who just happened to be in the right place at the right time.

Pastor Joey Hufstedler was on his way to work when, out of the corner of his eye he saw something that wasn’t right — flames. That’s when he sprang into action and single-handedly saved his neighbors.

“I noticed a fire. I didn’t really realize at first what it was,” Hufstedler said. “I drove into someone’s driveway and turned right around.”

But what is even more remarkable is that Hufstedler never goes into work as early as he did Wednesday.

And it was those 15 minutes that Kevin Smith is crediting with saving his wife and two children.

“If he had driven by a little later, we would have never made it out,” Smith said. “He’s the true hero.”

Hufstedler said when he ran up to the home flames were already shooting up and over the roof, so he knew he did not have much time to bang on the door and get the family out safely.

“He was beating on the door and he said he was going to break it down if he had to,” Smith said. “But luckily we heard him.” 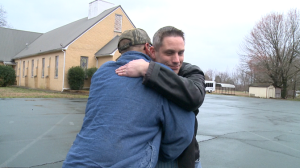 With only seconds to spare, the family was able to escape, and they say only one man is to thank. Although their home and belongings are gone, they are thankful for a new friendship and each other.

“We lost everything,” Smith said. “But I got my kids, I’ve got my wife, and I’ve got our dog, and that’s all that matters.”

Luckily, none of Smith’s family was injured in the fire, but he did suffer a minor burn.

The Gibson County Fire Department said the cause of the fire is still under investigation but that there were working smoke alarms inside the home.

McKenzie shoots their way past Collinwood in region quarterfinals