Officials trying to determine cause of smoke, fire inside jail

JACKSON, Tenn. — Jackson firefighters rush to the Madison County Jail inside the Criminal Justice Complex, Friday evening for a report of smoke and a possible fire.  The call for help went out around 7:30 p.m. to the location on 515 South Liberty Street.

Officials with the Madison County Sheriff’s Office said the smoke and fire was caused by either an inmate lighting a piece of paper on fire by damaging an electrical socket or a damaged fan in their ventilation system.

According Battalion Chief Johnny Brantley with the Jackson Fire Department, they found smoldering piece of paper stuffed it into a vent inside one of the pods in the jail. The smoke filled two floors of one pod, an area where inmates are housed.  Firefighters said they never saw actual flames, just a lot of smoke.
“On the first and second floor it was pretty smokey when they first when in there but they ventilated that are 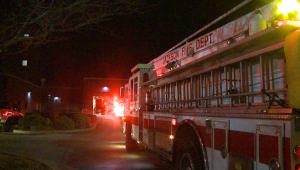 a,” Battalion Chief Johnny Brantley said. “They investigated it real well and found the paper in the vent.”

Brantley said some inmates had to be moved so firefighters could ventilate the affected pod.  Jail officials said the inmates are now back safely in their cells and no contraband was found during a search of their area.

Fire crews said they were escorted into the jail by Jackson Police as a safety precaution for firefighters.

No injuries were reported and the investigation is on-going.