JACKSON, Tenn. — Lock up your guns or get locked up. A new proposal in the state legislature would punish people in Tennessee who leave loaded firearms accessible to children younger than 13. 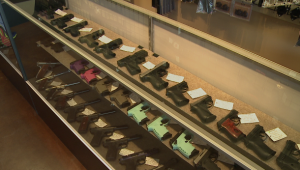 “I keep my guns put up to where they can’t get them,” Christina Black, a parent of three, said.

The legislation is known as MaKayla’s Law after 8-year-old MaKayla Dyer from White Pine, Tenn., who was shot and killed by another child.

If approved, the charges would vary. It could be a misdemeanor or felony depending on if the child fires the gun, injures someone or kills someone.

“My opinion, the best thing you can do is teach your kids about the weapon,” Madison County Sheriff’s Office Deputy Chief Steve Overton said.

Overton said there already have been 21 accidental shootings in Tennessee this year. “If you’re going to have a weapon in your house, it needs to be locked up or rendered safe,” he said.

Paul Burkart owns Smokin Guns in north Jackson. He said you can buy a trigger lock for $2 or get a small safe for as little as $40. “You cannot sell a handgun without a locking device,” he said.

Black supports the proposal. “If the kids can’t get a hold of them, they can’t use them,” she said.

The legislation would require licensed gun dealers to post a sign warning customers that it is against the law to leave a loaded gun accessible to children.

If approved, the new law would take effect July 1. Stores would have to have signs posted by Feb. 1, 2017.