Milan, Tenn. — Officers are searching for a suspect in an armed robbery that took place Monday morning at a Dollar General store. 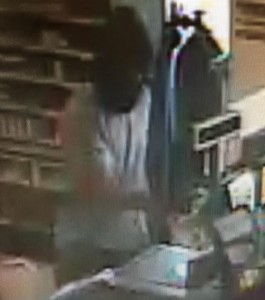 Milan police released this security image of the man wanted in the Monday morning armed robbery of the Dollar General store on Ellington Drive.

According to Milan Police Chief Bobby Sellers, a masked man jumped over the counter and robbed the store on Ellington Drive around 8:45 a.m. No injuries have been reported.

Police say the suspect is a black man and was wearing a black ski mask. Security cameras reportedly show the man fleeing the store and heading south.

The Milan Police Department, Gibson County Sheriff’s Department and Tennessee Highway Patrol along with their K-9 units are searching for the suspect. A reward is available.

The store has been reopened.