JACKSON, Tenn. — The Jackson City Council members approve repairs and changes from some city structures at their monthly meeting. 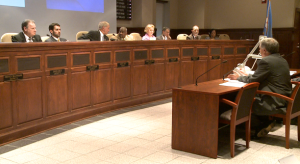 A municipal code concerning door-to-door sales will change. “This would have a different application,” Karen Bell, Jackson director of finance, said.

Effective immediately, permits for solicitors for profit will expire after 180 days. Under the previous code, they were valid for 365 days.

The application also will change and solicitors will have to wear permits issued with a photo ID included.

Councilman Johnny Dodd said it’s one more way to keep residents safe. “Right now you got so many scams going around, and we want to know who’s in our community, what companies are coming in,” he said.

At $30,000 each, the council approved the purchase of two new vehicles for the Jackson Police Department. Sgt. Derick Tisdale with the department said they plan to purchase them as soon as possible. One vehicle will be for administration, the other for training, according to Tisdale.

A new netting will be added to the right and left field sides of The Ballpark at Jackson.”That is a safety factor which is currently being mandated by professional baseball in all the ball parks,” Mayor Jerry Gist said.

An additional $145,000 has been approved to pay for repairs to the stage lift at the Carl Perkins Civic Center. City officials said the area is dangerous and needs the repair before hosting the next Miss Tennessee Scholarship Pageant.

Eight retired bullet-proof vests will be donated to Jackson-Madison County General Hospital to be used by security guards on duty, Dodd said.

A financial audit report was also presented to the City Council at the meeting.

Auditors said the city is doing well with managing the money and ended fiscal year 2015 with just less than $20 million in the general fund’s balance.